What might the privatisation of Channel 4 mean for advertisers?

WHAT MIGHT THE PRIVATISATION OF CHANNEL 4 MEAN FOR ADVERTISERS?

Channel 4 holds a unique position in the UK TV marketplace; owned by the government but commercially funded through TV ad revenue it is not required to make a profit. Any profit that is made is reinvested into the production and commissioning of content. This means that the channel has some of the most diverse and premium programming on air. However, this ownership structure is up for review with the government leaning towards selling off the channel to the private sector.

For consumers it matters because if C4 is made a private company there will be more pressure to increase profit margins for the stakeholders/owners; meaning more mainstream and less hard hitting, risk-taking content to try and capture that mass audience reach. C4 is the most premium and youngest skewing channel on UK terrestrial so this move will be damaging it’s USP. We will be sure to see the commercial minutage creeping up to make room for more advertisers and more cash and disrupting the viewing experience.

A worsened viewing experience will impact us as advertisers because it will lead to an accelerated migration of the really hard to reach audiences to on-demand platforms, both BVOD and SVOD. We can still access consumers through BVOD however there are significantly fewer reporting metrics available and thus fewer insights. Meaning even greater need for the BVOD measurement platform, Project Dovetail to come to fruition.

In terms of inclusivity C4 prides itself in being the leader in this space; their content portrays all abilities, races, sexes, sexual orientation, and regional representation of the UK. Which in turn has provided some of the best performing and award-winning stories that should be aired on the mainstream terrestrial channels. Think Derry Girls and the Irish troubles, It’s a Sin and the Aids crisis and the Paralympics.

Regionally C4 hold a National HQ in Leeds and creative hubs in Glasgow and Bristol to “launch a new era… in which C4 will be rooted in and more connected to the lives of the communities that make up the UK”. It is unlikely that a private buyer similar to Jeff Bezos is going to be concerned with halting the ever-increasing London-centricity of the UK.

And finally the announcement has outraged production companies and actors alike who even went as far as buying a full-page ad in the Daily Telegraph to grab the attention of that audience ahead of the Conservative conference. Urging the government not to sell C4 or else it will put hundreds of smaller production companies who support indie films and actors out of work.

It is difficult to see what the perks are of this sale; the government state that they are reviewing ownership to create exciting investment opportunities for Channel 4 to compete against streaming giants. Others believe this is yet another step in Boris Johnsons’ “war on culture”; probably didn’t help when the head of C4 News called Boris Johnson a known liar and a coward. 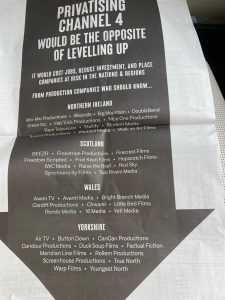